The Promulgation of Universal Peace

The Promulgation of Universal Peace is a compilation of 140 talks and extemporaneous discourses given by ‘Abdu’l-Bahá on the fundamental principles of the revelation and teachings of Bahá’u’lláh-principles that form the basis of the universal peace Bahá’u’lláh has promised “shall come.” Among the multitude of subjects discussed are the coming of age of the human race, the oneness and continuity of the Manifestations of God, and the oneness of religion as a social force for establishing world order and peace. These talks were given during ‘Abdu’l-Bahá’s 1912 visit to the United States and Canada. They are a priceless resource for studying the language and the personal example of ‘Abdu’l-Bahá.

‘Abdu’l-Bahá, meaning in Arabic “Servant of the Glory,” was the title assumed by ‘Abbás Effendi (1844-1921), the eldest son and appointed successor of Bahá’u’lláh, the Prophet and Founder of the Bahá’í Faith. A prisoner since the age of nine, ‘Abdu’l-Bahá shared a lifetime of imprisonment and exile with his father at the hands of the Ottoman Empire. He spent his entire life in tireless service to, and promotion of, Bahá’u’lláh’s teachings. 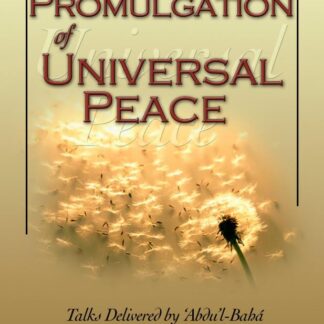 Je bekijkt nu: The Promulgation of Universal Peace € 14,00
In winkelmand