The Revelation of Bahá’u’lláh volume 3

Volume 3 in the four volume series about the Writings of Bahá’u’lláh.

The Revelation of Bahá’u’lláh is a four-volume series about the Scriptures of the Bahá’í Faith. It is a unique survey of the Writings of Bahá’u’lláh, using both authentic English translations and original sources, that describes the contents of all major works, including many unknown in the West.

Volume 3
From behind the walls of the Most Great Prison, Bahá’u’lláh addressed His majestic summons to the rulers of the world. Here he submitted to the tragic death of His beloved son, Mírzá Mihdí, the Purest Branch, and here, in the house of ‘Udí Khammár He revealed His Most Holy Book, the Kitáb-i-Aqdas.

In this long-awaited third volume of his survey of the Writings of Bahá’u’lláh, Adib Taherzadeh gives us new and fascinating insights into the works revealed during, and the events of, this period. Five chapters alone are devoted to the themes of the Kitáb-i-Aqdas, while other important works examined include the Súriy-i-Haykal, the Tablets to the kings and rulers, the Lawh-i-Fu’ad and the Fire Tablet. And then there are the heart-warming stories of Bahá’u’lláh and His Family, of His companions, of His exile and of those who came as pilgrims, the stories of Badí’, of Mírzá Abu’l-Fadl, of Hájí Amín . . . and much, much more.

A book every Bahá’í will want to read. 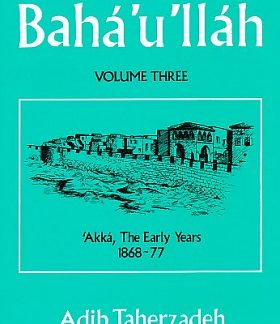 Je bekijkt nu: The Revelation of Bahá’u’lláh volume 3 € 19,25
In winkelmand